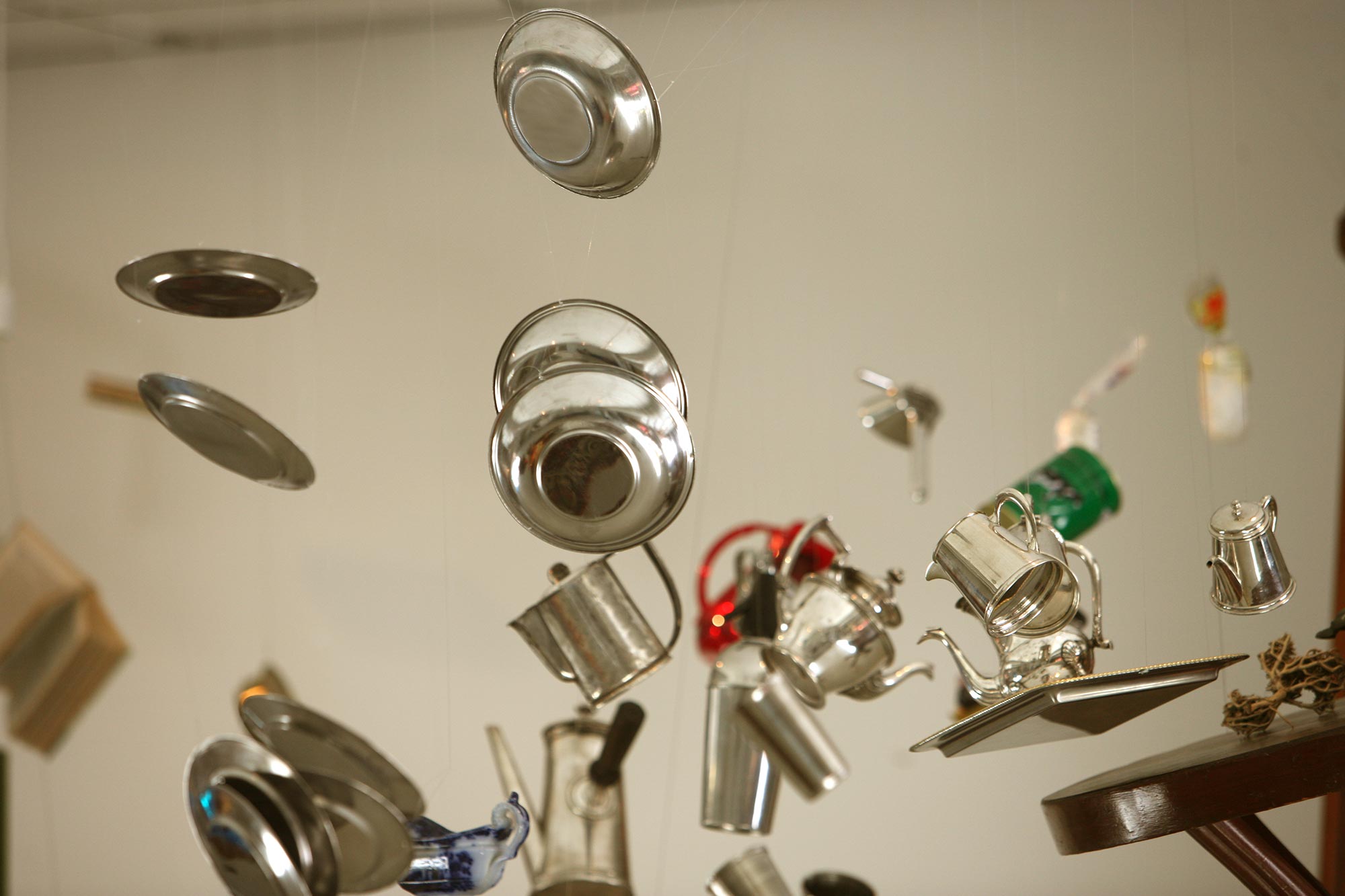 THIS IS A LOVE STORY

Centro de Arte de Burgos. 2009
THE CUP OF TEA AND GRAVITY Rhythm, intensity, emotion, mystery and energy are concepts on which Pamen Pereira establishes her artistic discourse ; It is thanks to the importance given to scales, the flow of feelings and the physical place occupied by the person who performs the works, allow us to follow his evolution. On the tour, we find some images that recreate the confidence in being able to explain, from art, a demanding fidelity to life, defending a personal attitude, away from generational behaviors. Miguel Fdez. Cid extract from the text The cup of tea and gravity published in the catalog This is a Love Story published by the CAB of Burgos 2009
Aerial installation, furniture and various objects.
Exhibition curated by Asunta Rodríguez
Photography: Pepe Caparrós
DOCUMENTATION
Exhibition catalogue cover
Exhibition catalogue
La taza de té y la gravedad – Miguel Fdez. Cid
Todo pende de un hilo – Dokushô Villalba 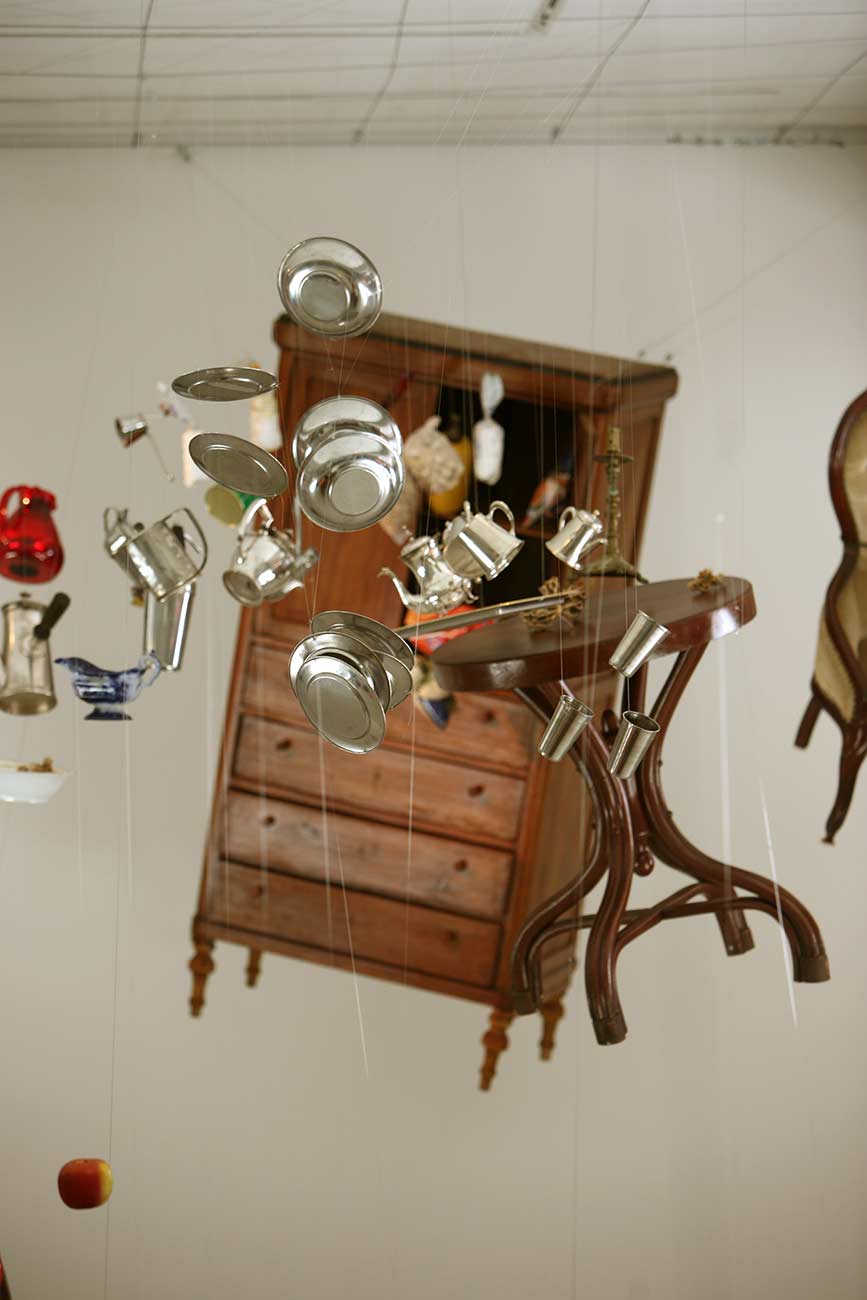 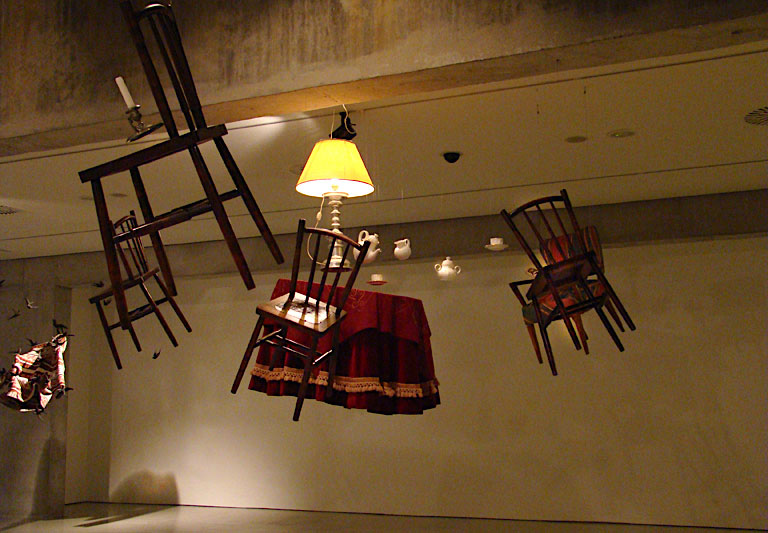 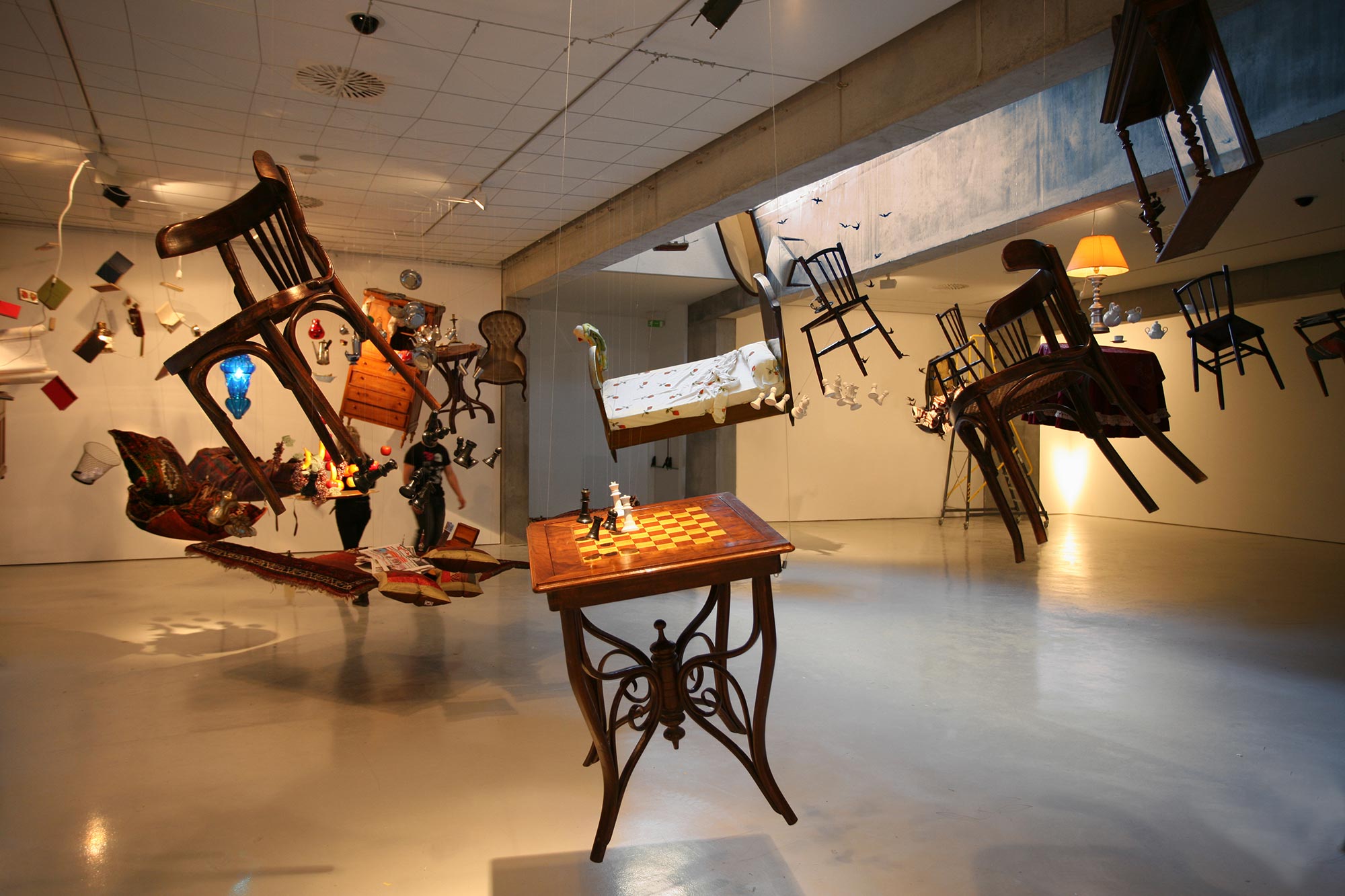 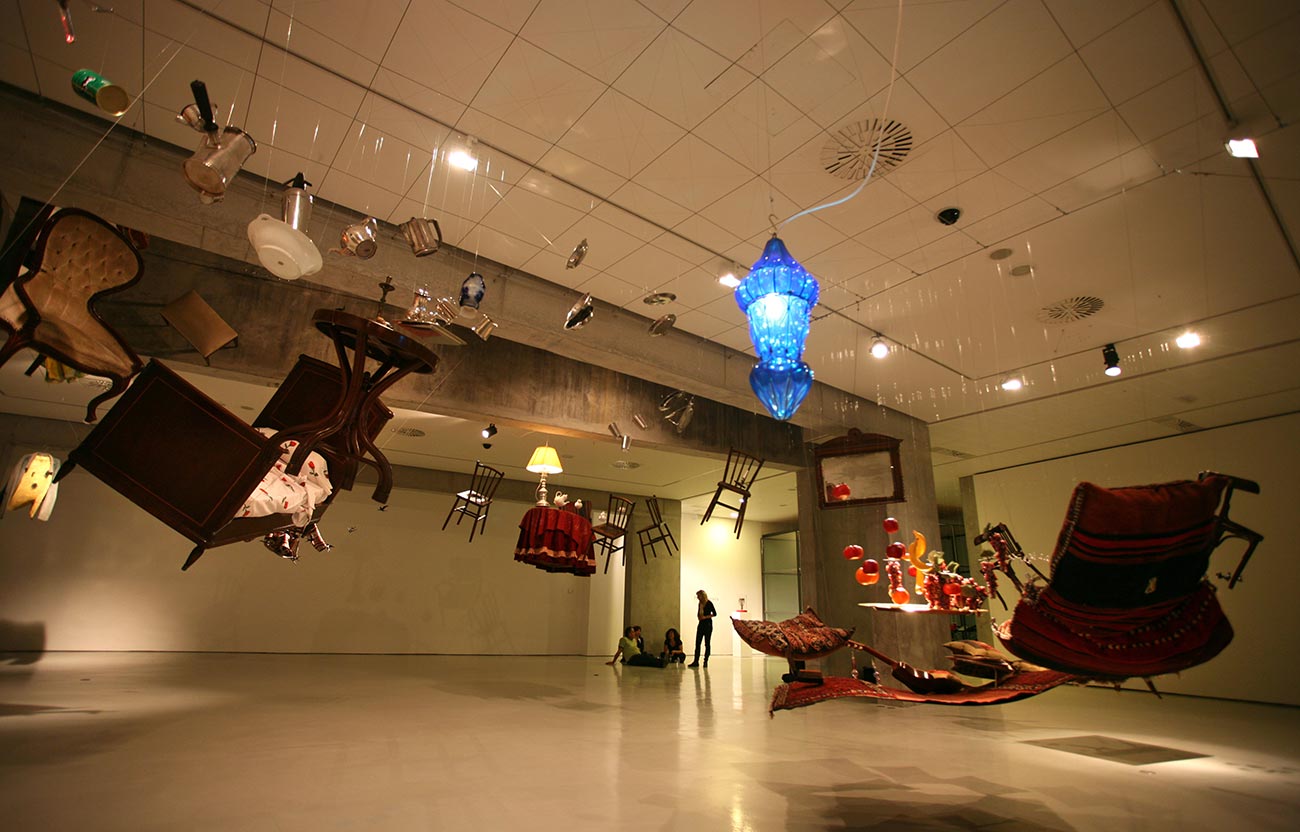 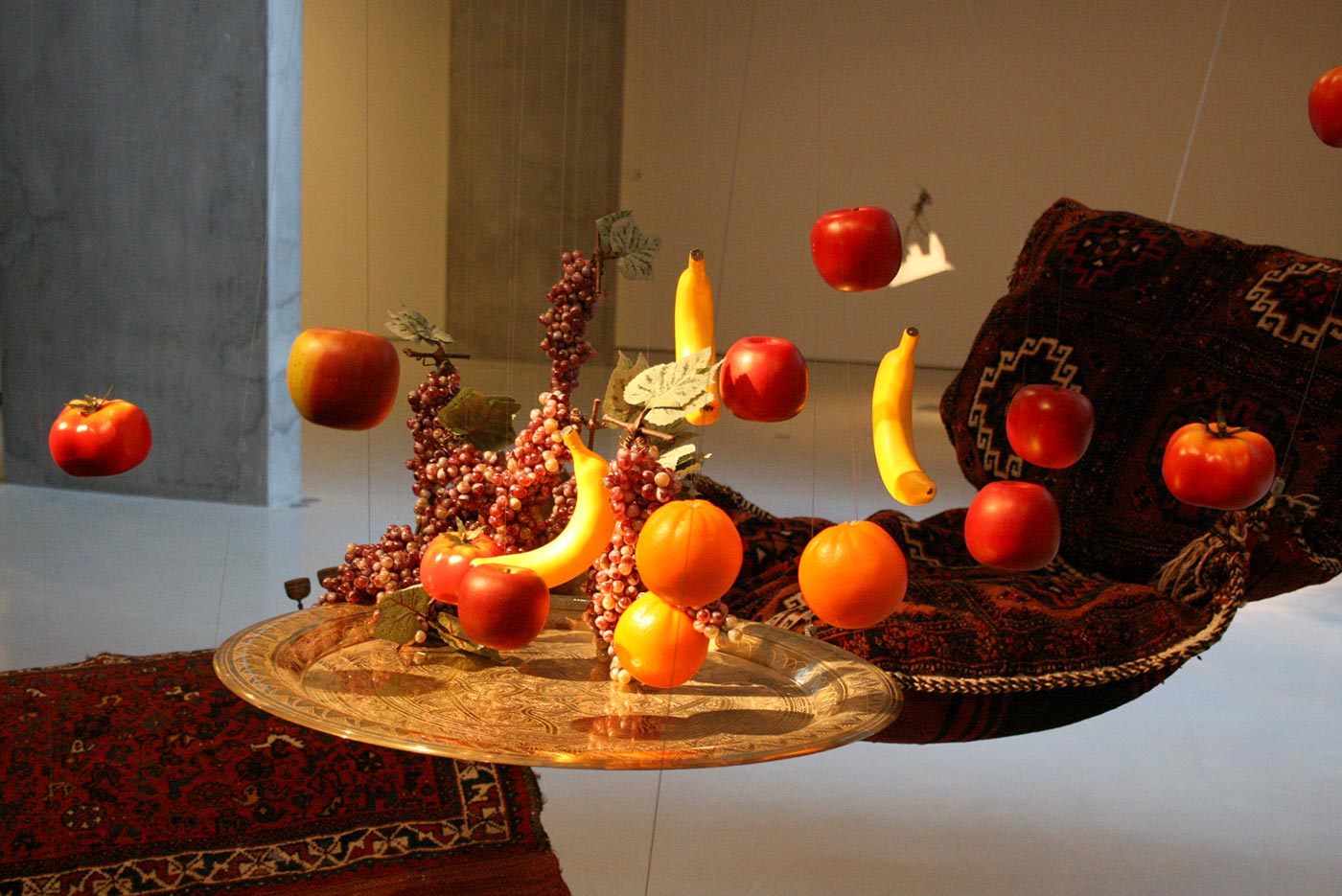 Detalle de la exposición This is a love story 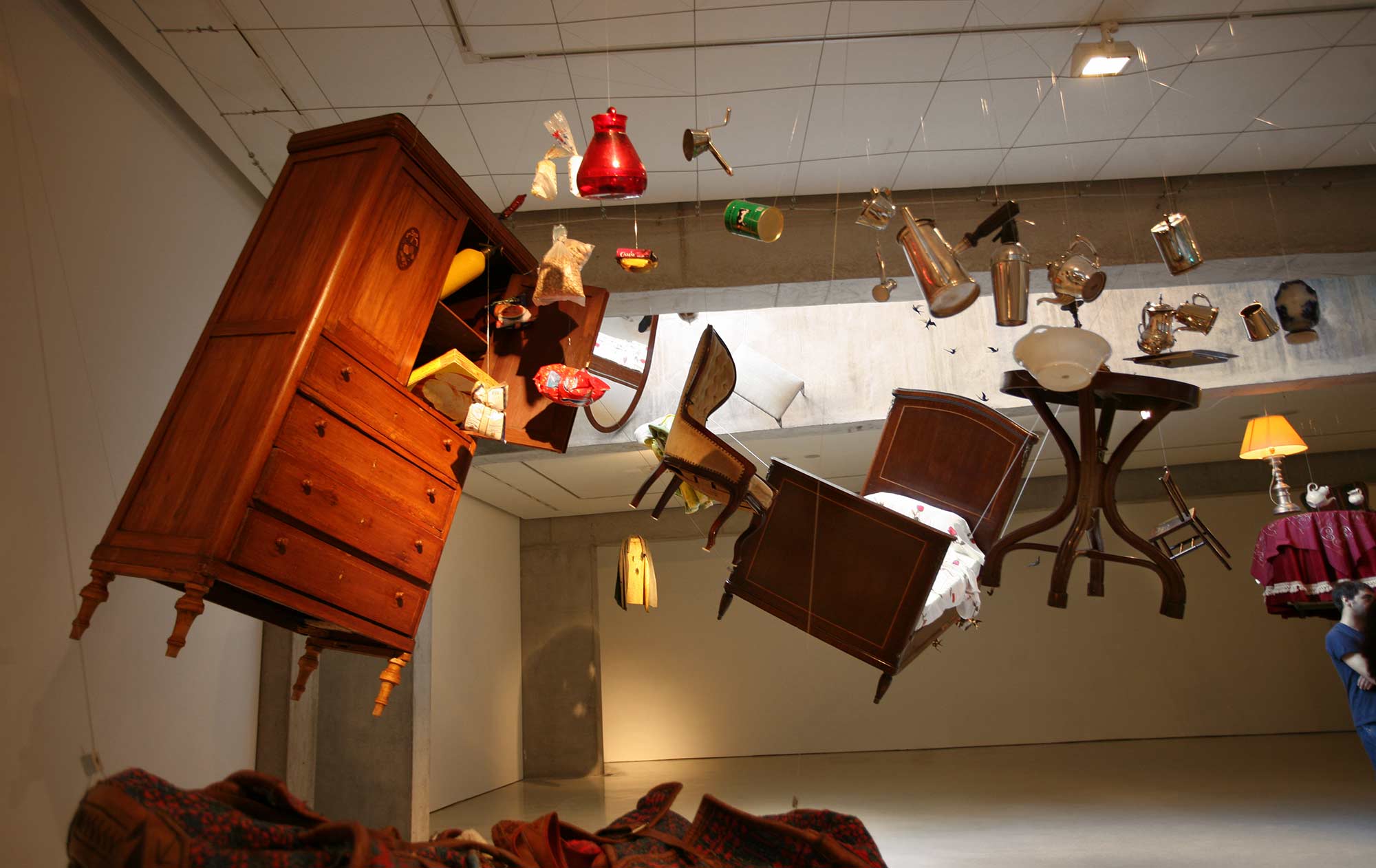 EVERYTHING HANGS BY A THREAD

Despite the solid reality of the material world, despite the fact that common perception representing objects trapped in space and time, despite the evidence universal gravity, everything is after all incredibly fragile. Life is a delicate mirage. Everything hangs by a thread.

The existence of objects and living beings, beyond their apparent stability and consistency, hangs by the invisible threads that plait and support the web of real things; subtle and frail threads wich turn the weight of existence into an unbearable lightness.

One microscopic microbe is enough for any complex organism to collapse and disappear. A rise of two or three degrees in global temperature is enough to bring about dramatic changes. When one several of the invisible threads that support the existence of objects and beings are cut, both the objects and beings cease to exist. The phenomenal nature is impermanent. The solidity of our own physical body is insubstantial, that is, it is not really solid.

Usually, the spirit lives trapped in the shape, in the heaviness and the concretion of matter, even if it is the spirit is who weaves  the invisible threads that support the material forms and objects. The visible is nothing more than a vision of the invisible. However, sometimes, when the spirit breeze  rises and blows, everything becomes a party …

When entering the space created by Pamen Pereira in the Caja de Burgos Art Center, the viewer is transported by the joyous dance of everyday objects that levitate weightlessly beyond time and space.

The breeze of the spirit holds up everything with its presence. Wrap up chairs, beds, kettles, boats, mirrors, fruits, guitars, books, old sweaters. The drawers of the pantry cupboard open wide and the daily provisions float in a oniric space in which the past,  present and the future melt into one and disappear in a timeless dimension.

Dokushô Villalba. Excerpt from the text Everything hangs by a thread published in the catalog This is a love story, CAB 2009 c 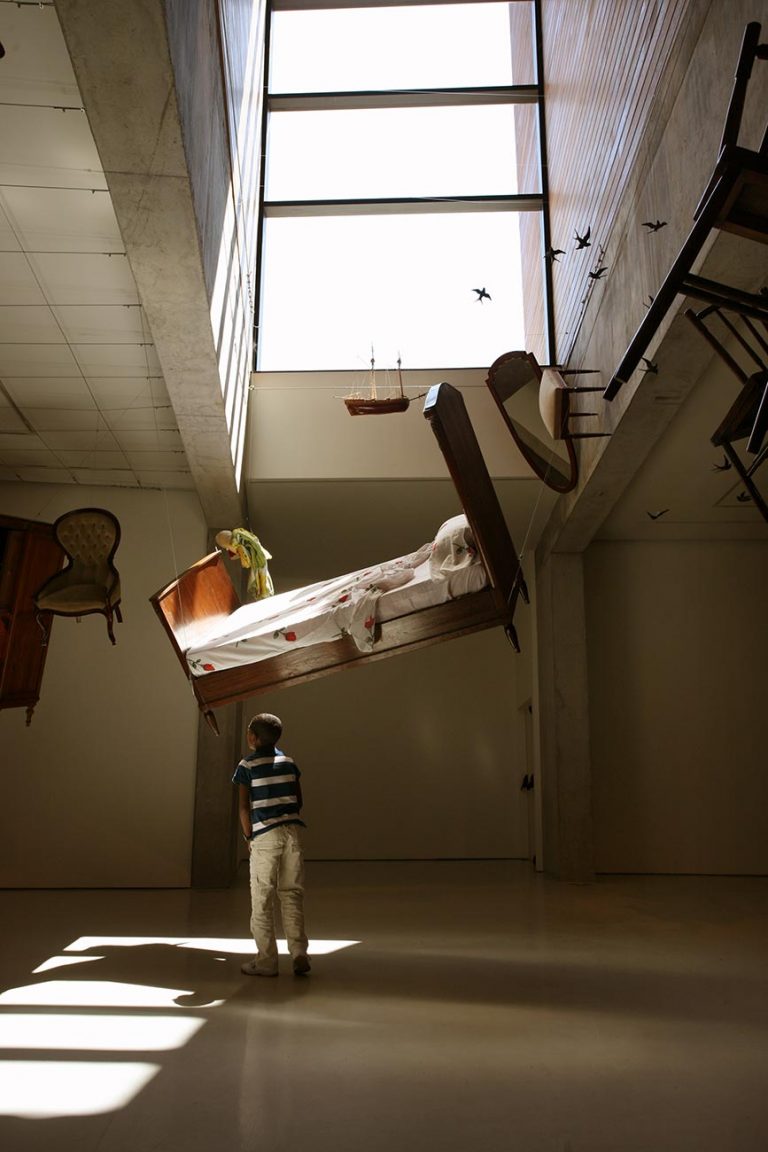 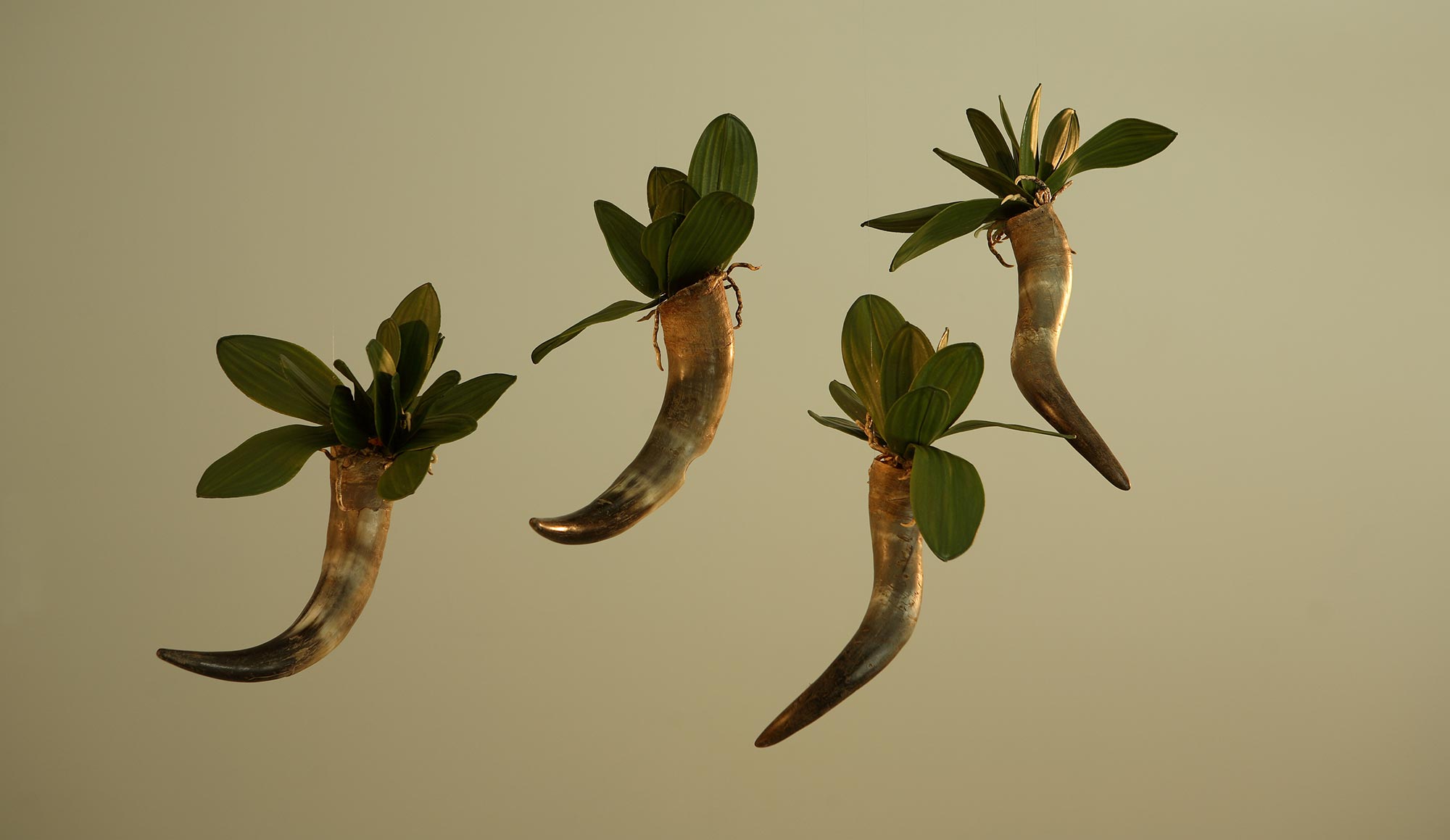 Nómadas II. Instalación objetos diversos medidas variables.
It is the loving gaze of the artist [This is a love story] that opens the prison created by gravity and frees objects and shapes from its tyranny. “The weight of the world is love. Under the burden of solitude, under the burden of dissatisfaction the weight, the weight that we carry is love”. “In dreams it touch the body, in thought constructs a miracle” (…) This and the other poetic quotes are from Allen Ginsberg’s Howl and Other Poems. Translation by Katty Gallego. Book Viewer, Madrid 1993 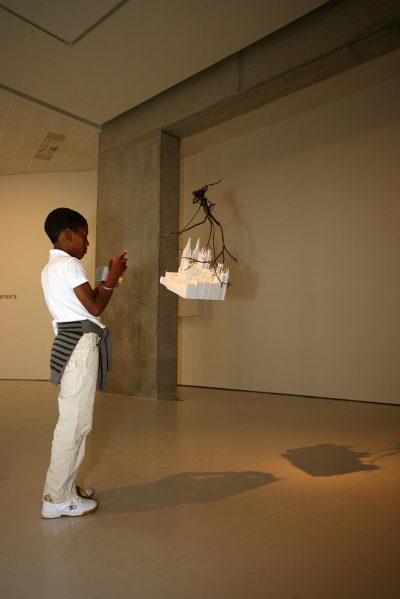 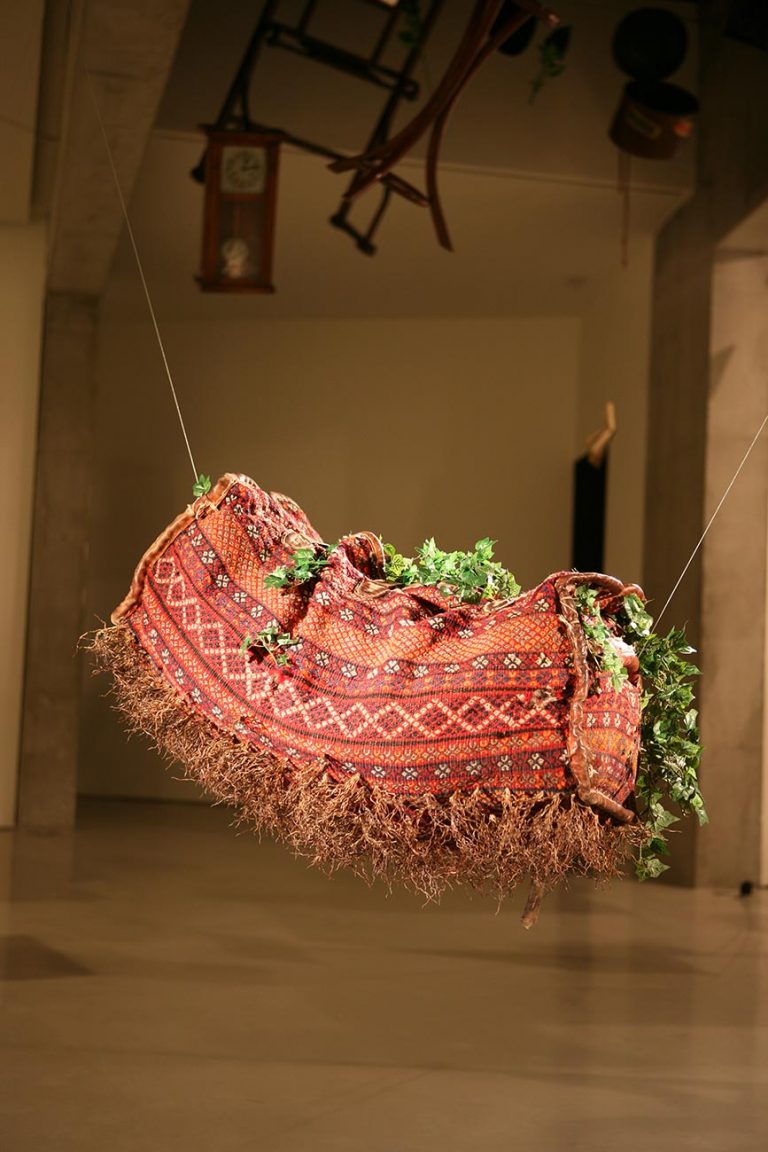 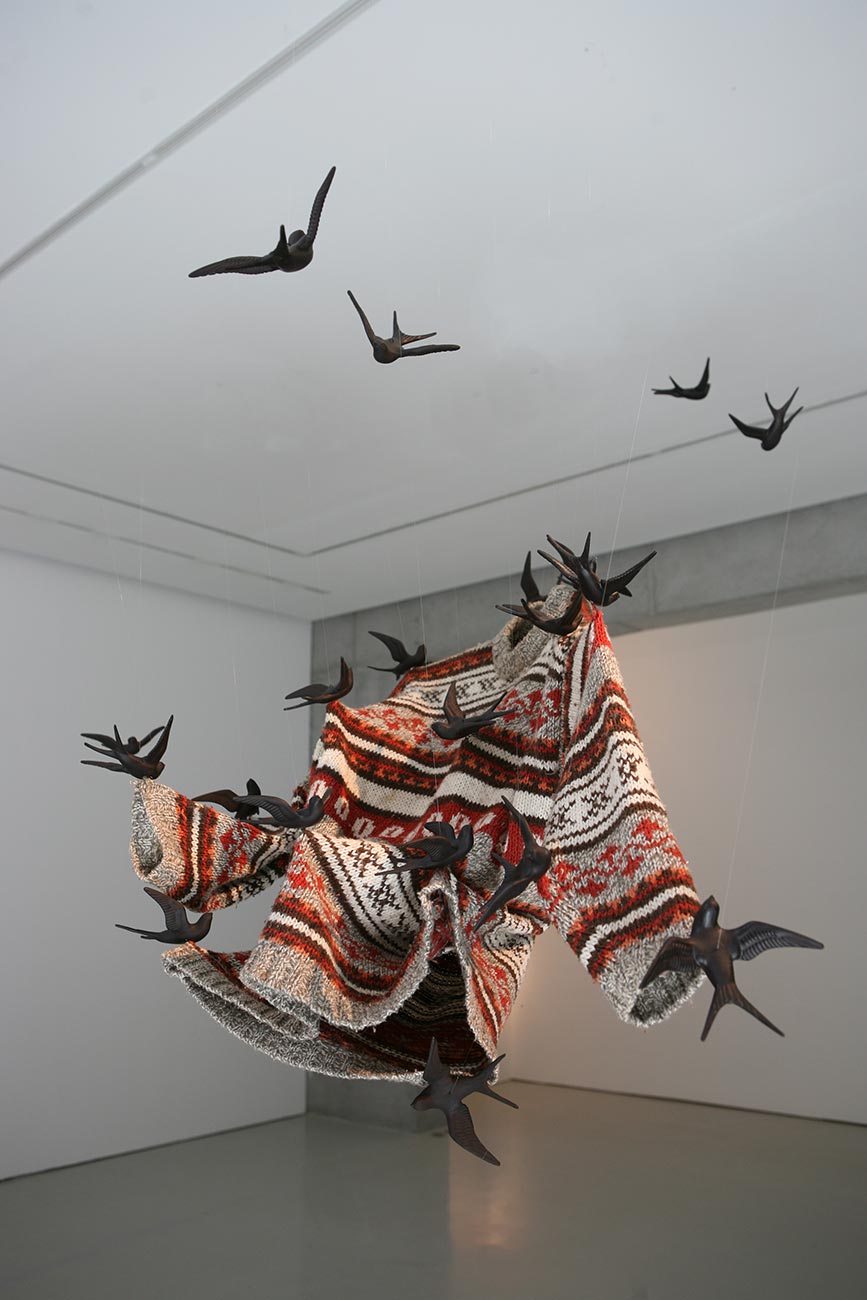 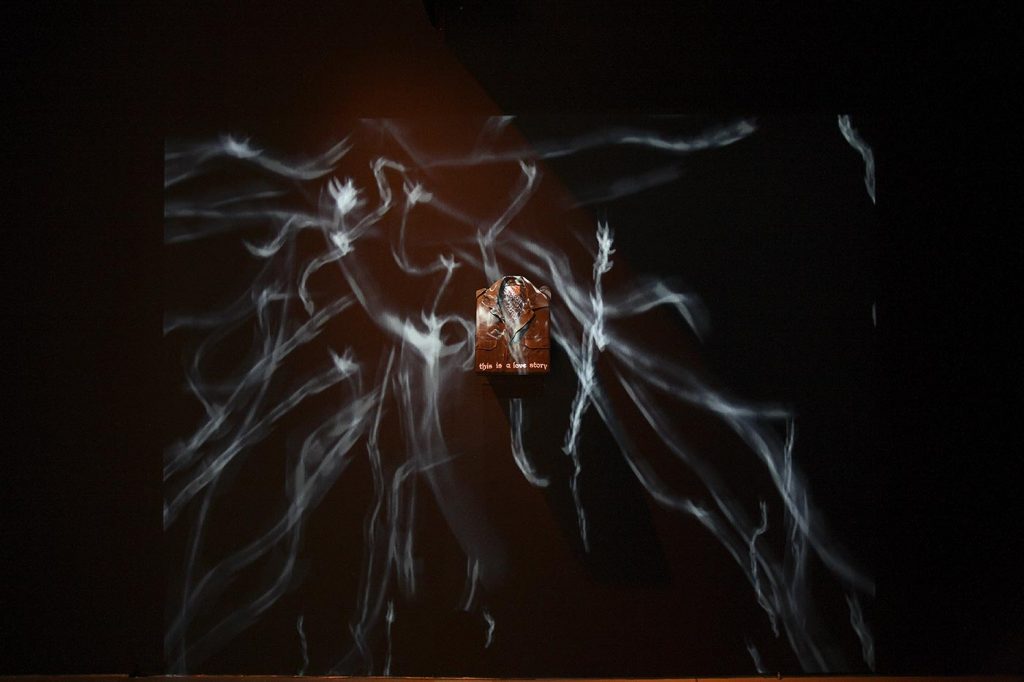 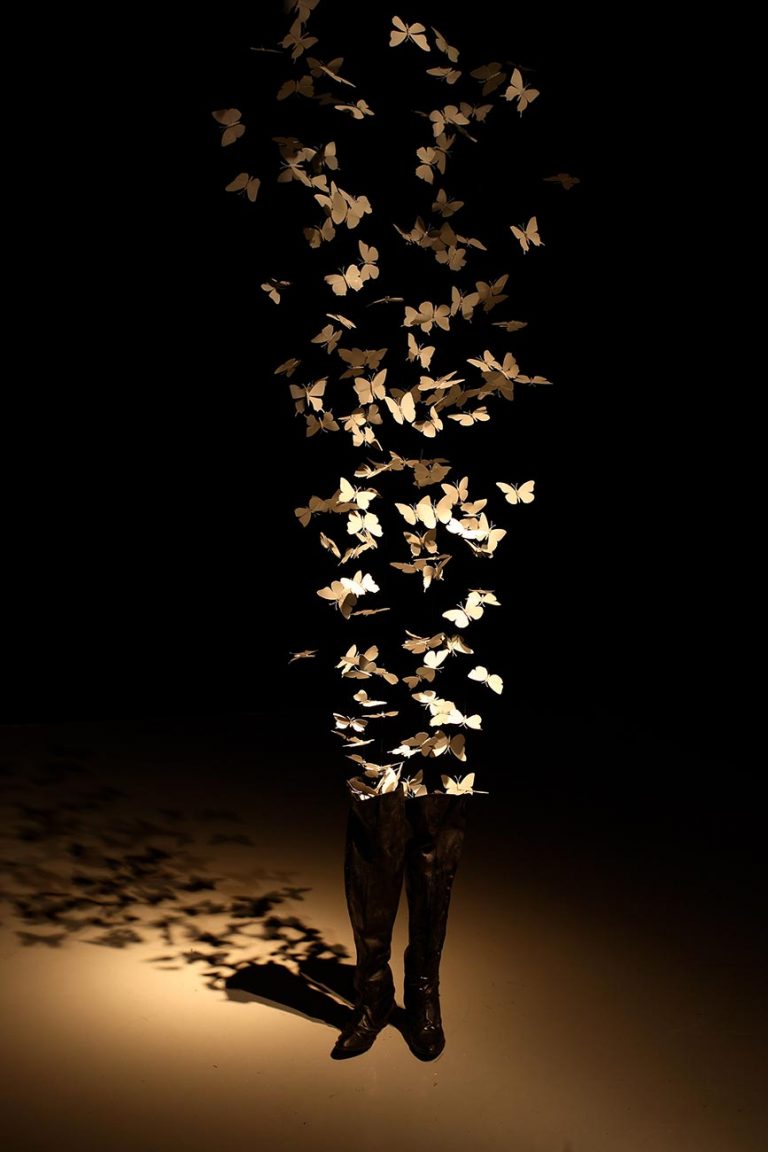 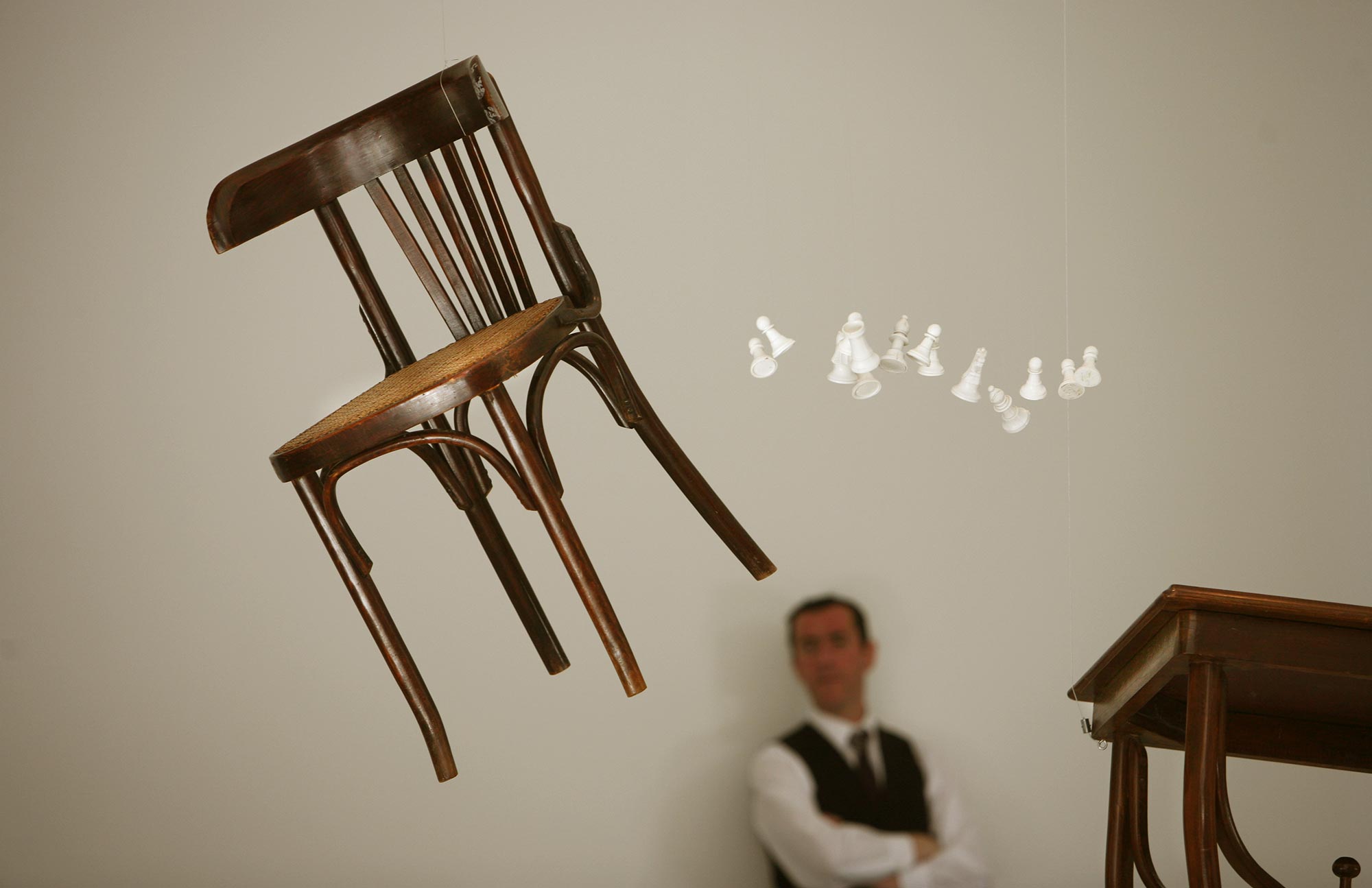 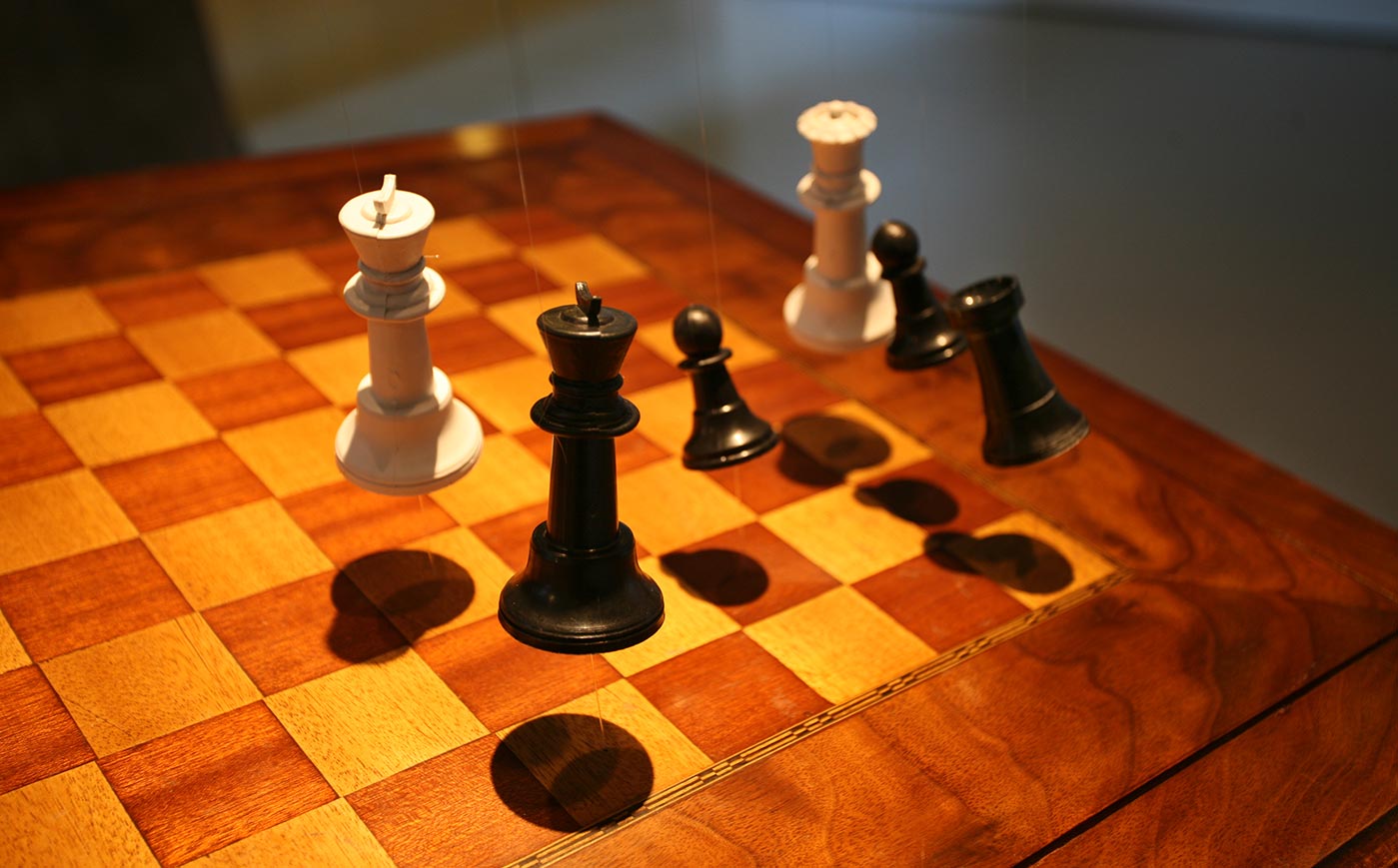 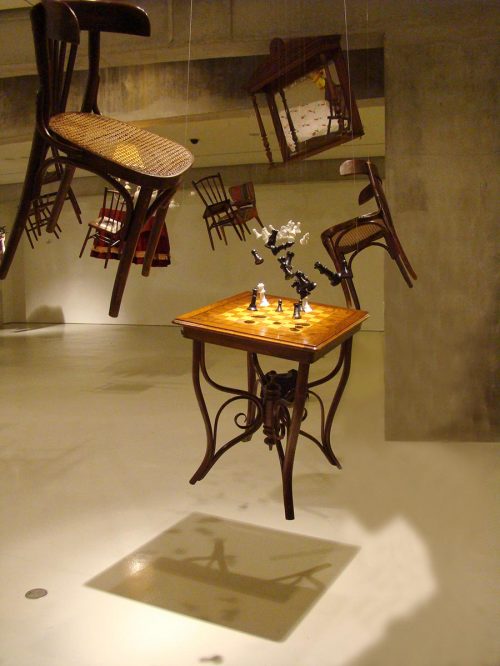 The implacable mathematical logic of chess, the rigid determinism of causality that governs our movements, become bearable only when the breath of love penetrates and elevates them. The unbearable lightness of being finds its redemption in the arms of love. “Pamen Pereira … looks out from the heart fiery with purity because the burden of life is love, but we carry the weight wearily, and we have therefore to rest in the arms of love Finally we have to rest in arms of love .. ” “There is no rest Loveless, no dream without dreams of love”. It is an amniotic universe, a fertile womb of life prior to its manifestation in space-time, a kingdom of goodness and grace, of calm and security, of happiness and joy, the one that Pamen Pereira has created for us to the delight of all of us who dare enter it with amazement intact. “Yes Yes, that is what I wished what I always wanted, I always wanted to return to the body where I was born ”. Zen Master Dokushô Villalba Jul 2009 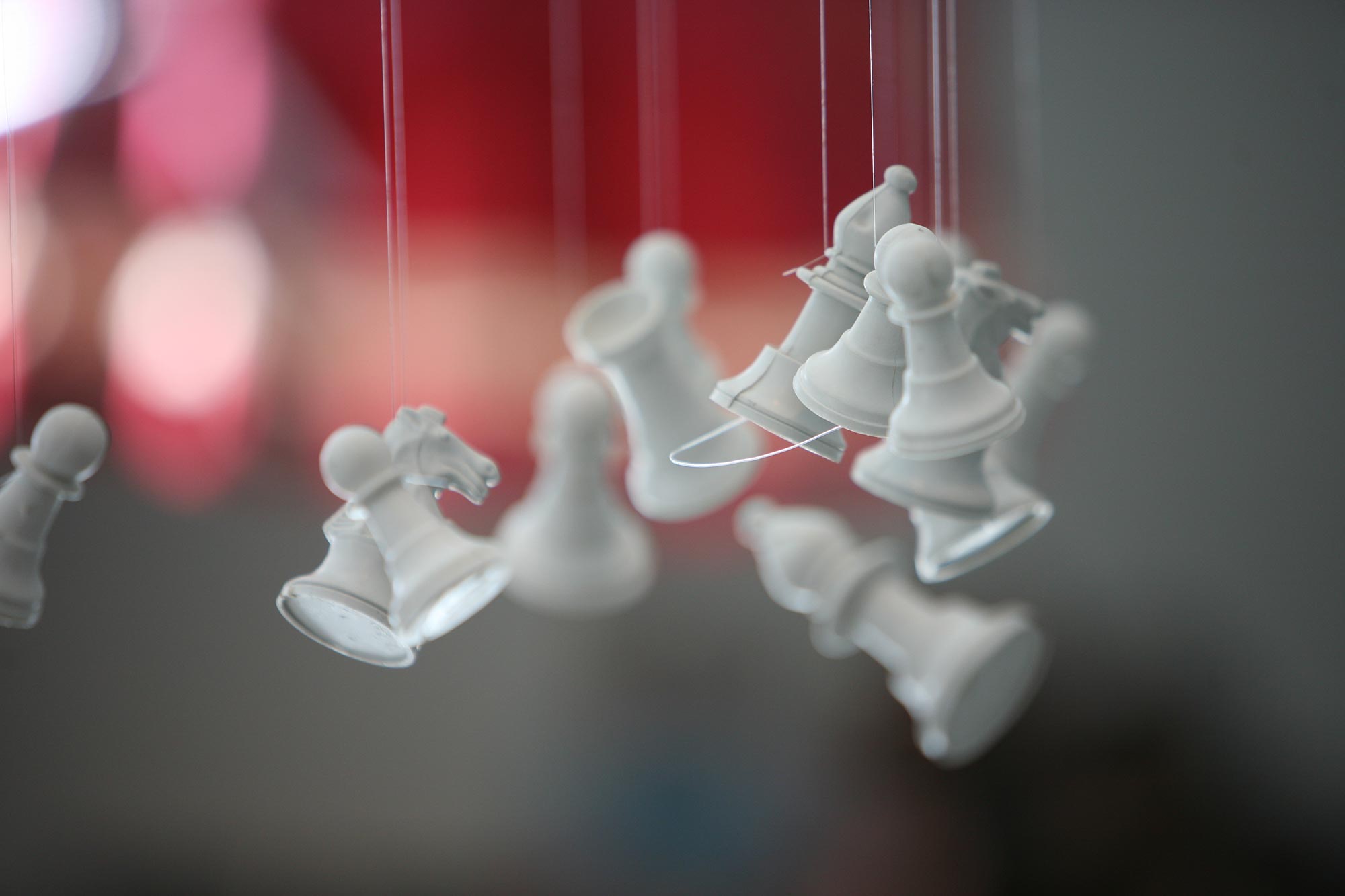